In 2013, the year of preparation for the centenary celebration of Schoenstatt’s foundation in October 2014, the Sisters in South Africa took on a new apostolate – CHRIST IN THE MALL! We all know that the days before Christmas are very busy – whether preparing for the birth of Christ or the festivities that surround the season. Many people throughout the world are occupied with buying gifts, getting food supplies sorted, attending parties or searching for new decorations. These are good things, as it’s important to celebrate and spread love among each other. Unfortunately, numerous people in today’s society forget about the real meaning of Christmas – Christ coming into our world! So, over the past five years, on Gaudete Sunday, the Schoenstatt Sisters spend the day at their local shopping Mall to remind shoppers of what Christmas is all about. 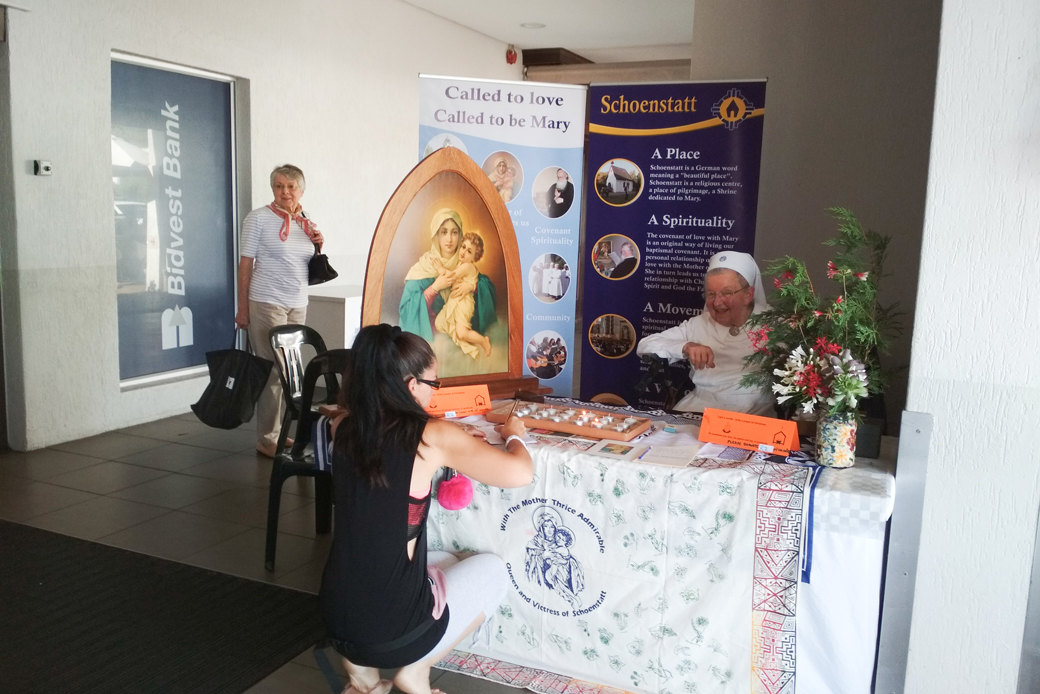 Outside the main entrance, the Sisters set up three tables. One table had lots of free literature to take away and reflect on as well as news about upcoming events. The second table was for children to make Christmas cards. Shoppers passing by could also buy homemade cards lovingly decorated by Schoenstatt members who came to assist. Sitting behind the third table were one or two elderly Sisters praying for the needs written in the petition books where people expressed their prayer intentions. Alongside the large picture of Mother Mary, our Mother Thrice Admirable of Schoenstatt (MTA), there was the opportunity to burn a candle and also enter into conversation with one or the other Sister, which proved to be very fruitful.
The reaction of shoppers entering the Mall was interesting and varied. Some appeared to be in a hurry and simply walked by trying to ignore what was on offer. Others promised to come back later which a few managed to do, while others did not return. However, quite a number took the opportunity to write down their prayer or converse with a Sister. Some didn’t know how to write a prayer or, in fact, what to pray for. We explained that they could just write down the names of loved ones for whom they would like to pray or for help in a difficult situation. For some it was clearly the first time that they had formulated a prayer. One person was very keen to write a prayer of thanksgiving.

On that joyful Advent Sunday, many stories were shared; some joyful – others painful! One couple from Germany passed by and recognized the Schoenstatt Sisters. They come from a town close to Vallendar and attend Midnight Mass every year in the Pilgrim Church. What a joy it was for them to encounter the Sisters. Another lady who was visibly distressed, began to write a prayer but her eyes filled with tears. She explained that her husband had recently died and it was simply a difficult day for her, so she had decided to get out and just go shopping. She was very grateful to meet us. Another young man came and spent a long time on his knees, writing down his prayer which was almost like a confession. He then got into a long conversation with a Sister. He left to go home but then came running back saying he had totally forgotten to purchase what he had come for and dashed into the shop. Another person surprised the Sisters and Schoenstatt volunteers with refreshing ice-cream for it was a typically hot African December day!
God and our MTA saw to it that for the setting up and dismantling of the stall, the right people ‘happened’ to be around to carry heavy tables and chairs and squeeze them into our little van. The ‘cherry on the top’ was to find Schoenstatt members at our Shrine in Constantia who were willing to help us to unpack and carry everything to its rightful place. Will we Sisters be back in the Constantia Shopping Mall next year? One comment is certainly a source of encouragement to continue this apostolate. It came from a member of the Dutch Reformed Church, a church in South Africa that formerly was opposed to anything Catholic. He said it was wonderful to see members of the Catholic Church being so active and bringing the real meaning of Christmas to the shopping Mall. 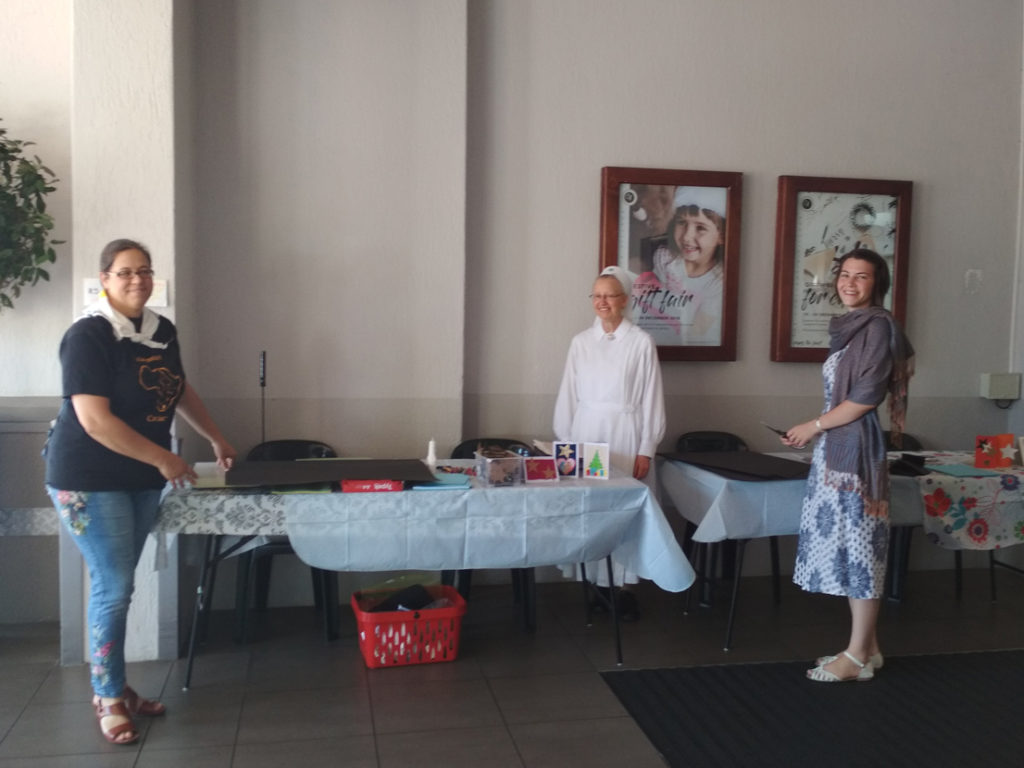